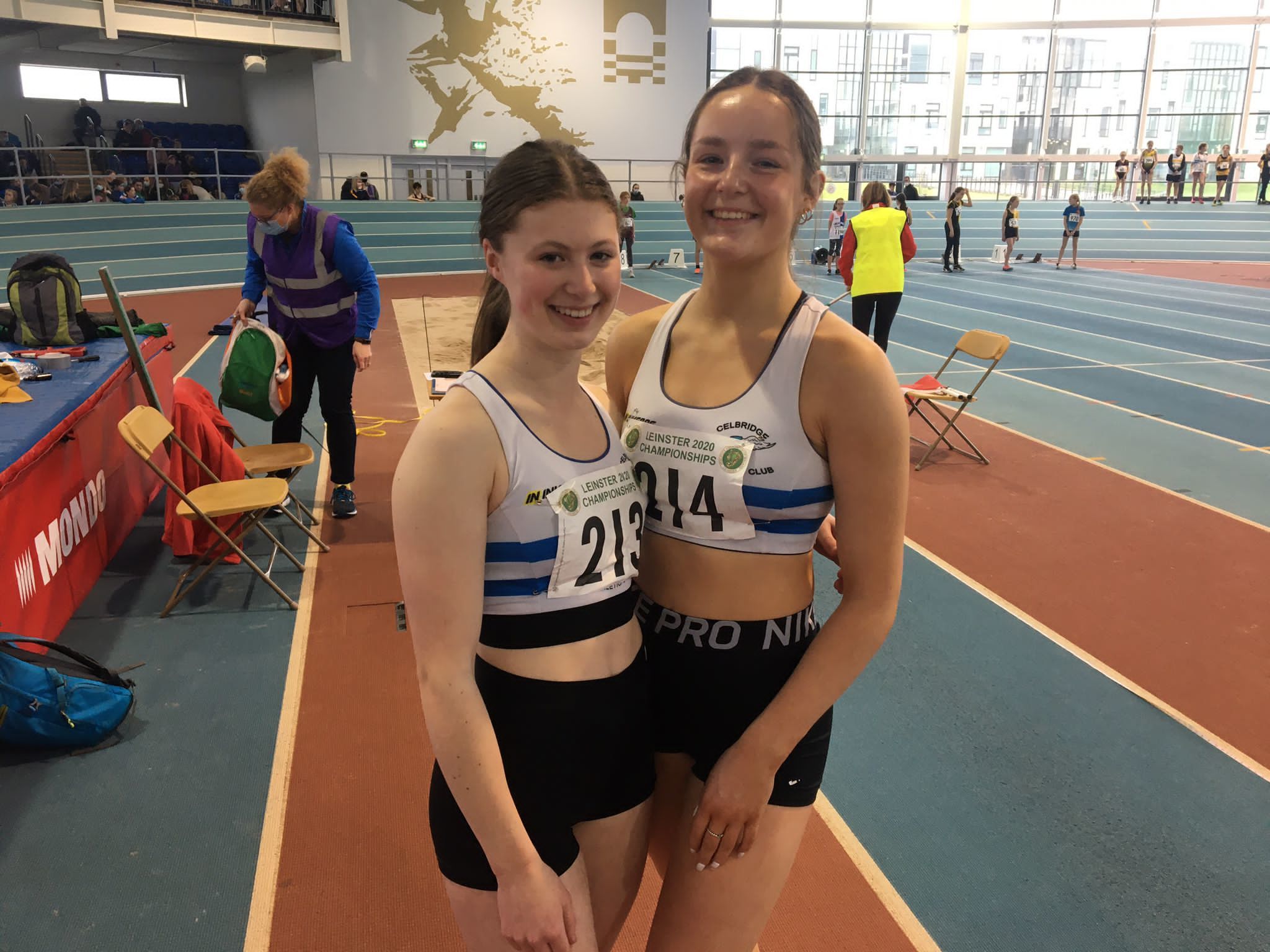 Last weekend saw our Juvenile athletes travel to Athlone for the Athletics Leinster Indoor T&F Championships. Once again, our Juvenile Athletes not only represented us with strong and committed performances, but they more importantly displayed impeccable behaviour and our older Juveniles led by example as always.

Saturday kicked off with the walks as Celbridge were well represented as always. In the Under 14 girls, we picked up 🥈2nd, 🥉3rd & 4th, as Holly Tipping pipped club mate Chloe Connors in the race for silver and bronze while Danielle Browne performed very well in 4th in her first ever Indoor walks competition.

In the Under 17 girls, Saoirse Kennedy performed very well following up on a strong County Championships taking home a 🥈silver medal, with Ava Connors back in third taking 🥉 bronze. Rhea Donnelly took 🥇Gold in the Under 19 girls, while Aidan Bayon took home 🥇 gold in the Under 17 boys. Congratulations to all of our walkers.

Next up on Saturday was the 400m time trials which saw our under 16 girls and boys take on the 200m x 2 for the first time. Our 2 girls, Aoibheann Russell & Laura McCullen both ran very well in their first attempt at this distance, while in the boys time trial, Leigh O’Brien ran a stunning 54.77, smashing the Championship Record and taking home the 🥇 gold, a wonderful achievement for Leigh.

Next up was the 1500m where our Under 16 boys stepped up to take on the seven and a half laps of the track at what was a serious pace from the off. In time trial 1, Adam Bradley came with his notorious late run to take 4th place in 4.37, a heat won by Jamie Wallace of Mullingar in 4.33. In Heat 2, Daniel Costigan set the pace from early on and was never touched as he clocked 4.32 to take home 🥇 Gold in a stunning performance, the first 1500m gold medallist within the clubs juvenile ranks for a long time. Evan Kennedy and Noel Clear performed well in there first time running the distance indoors, well done lads.

In the girls Under 17 1500m, Hannah Wollmer ran a blinder in her first ever Indoors competition finishing 5th in her race, well done Hannah.

We then moved on to the 60m sprints, where we had Ella, Alicia, Amelia & Zara perform well in the Under 12 girls heats, while in the boys under 12 Ethan missed out on qualification by a hundredth of a second.

In the under 13 girls 60m, Doireann & Danielle both qualified from there heats to the semi-final, where Danielle progressed to the final and just missed out on a medal finishing 4th, great work girls.

In the girls Under 15, Eimear, Ella, & Sarah all progressed while Melinda, Saoirse & Alliyanha missed out on qualification. Eimear won her semi-final in convincing fashion as Sarah just missed out on a final spot, while Ella also made the final. Late Saturday evening, Eimear & Ella took on Leinsters best, with both girls running a blinder, seeing Eimear take home a 🥉 bronze while Ella finished a brilliant 7th in her first ever Leinster final, a huge achievement for the girls.

In the Under 15 boys, Jack & Max took to the track with Max making the final while Jack narrowly missed out on a final berth. In the final Max once again proved to be one of the best sprinters around taking home 🥉 bronze in a very competitive final, and he’ll no doubt get stronger as the season progresses.

In the Under 16 girls, Mia & Kristiana narrowly missed out on the final, while in the boys, Leigh O’Brien not only won his heat, but he then went on to win 🥇 gold in superb fashion, making it a Day 1 double in the 60m & 400m, a fabulous achievement.

In the Under 17 girls, Michaela missed out on the final by half a second in what was a competitive heat. In the Under 19 girls 60m final, it was a silver 🥈and bronze 🥉 for Sarah & Ria as the consistent duo once again added to their every growing medal collection.

As we left the arena and rushed for the cars in the dark damp evening at 6.30pm, the race for McDonalds up the road was on……. And to the disgust of everyone, half of the midlands decided they wanted Big Macs for dinner on Saturday so the crew headed for the Dublin road, medal carefully packed away dreaming of that well-earned burger back home in Celbridge.

The eyes closed as soon as the heads hit the pillow near 10pm for many of our athletes, all looking for that beauty sleep to help recharge the batteries for day 2.

It was up and out the door at 8am on Sunday for many, as Day 2 kicked off with great expectation. The Under 16 200m heats were first up as Kristiana & Aoibheann both ran well just missing out on the final spot, while in the boys Leigh won his heat in style booking a final berth for later in the day.

Niamh & Michaela both ran strongly in the under 17 200m, missing out on the final by the smallest of margins, while Kyran ran a strong heat making the final of the under 17 boys 200m.

Sarah and Ria ran a strong 200m in the Under 19 girls final, with Sarah taking a brilliant silver, with Ria finishing 5th in what was one of the closest races of the day, well done both.

The 600 & 800m heats kicked off as we rattled through up to 12 heats in the space of an hour. In the under 12 girls 600m, Alicia, Ella & Erin ran their hearts out in there heats making their coaches hugely proud of their achievements, while Jack Devane flew the flag in the boys heats running a blinder in his first ever indoor event. In the under 13 girls 600m, Doireann ran a blinder making the final, and did us hugely proud in the final finishing 5th in a great time of 1.51.

In the girls under 14 800m, Holly, Isabelle, Chloe, Katie & Danielle all ran their hearts out in very tough heats. In the under 14 boys 800m, Jack won his heat in very impressive style, and went on to run a blinder in the final taking home a bronze 🥉 medal in a time of 2.25, a fabulous performance from Jack.

In the Under 16 boys 800m, Adam & Daniel both ran big heats qualifying for the final later in the afternoon while Evan ran well in heat 2 once again. In the Under 17 girls 800m, Hannah ran a very strong heat taking her place in the final later on Sunday, while Zara & Ava ran well but missed out on a final berth.

Divine ran a very strong heat in the 60m hurdles and claimed her place in the final, and finished 8th in a very competitive final, a great achievement in itself.

Our Under 16 girls’ long jumpers, Mia, Aoibheann & Kristiana all jumped short of PB’s missing out on the last 8 qualifying, but once again competed with great passion and love for athletics.

In the Under 15 girls’ high jump, Lydia Fleischer jumped a fabulous PB of 1.46m taking home gold 🥇 another fabulous achievement for Lydia.

Kyran and James both ran strongly in the boys under 17 800m final, another step in right direction 💪🏻💪🏻

As the light outside faded, and we approached the end of a long weekend, the best was yet to come!!! The under 16 boys took to the track for the final of the 200m, with Leigh O’Brien flying the flag. Having won double gold on the Saturday, Leigh went down in the history books as he took gold 🥇once again in the 200m final in a time of 23.83, receiving a huge ovation from the hundreds in the stands on what was memorable day for Leigh, congratulations on a fantastic achievement.

The boys Under 16 800m final was next up as Adam & Daniel took to the track. Silence around the stadium as the boys rattled around the first bend. A competitive field soon spread out as the pace got stronger and stronger. The 2 boys performed brilliantly and finished 2nd & 8th respectively, with Adam taking home the silverware 🥈 this time after Daniels gold in the 1500m on Saturday.

As day 2 came to a close near 7pm on Sunday evening, the overall sense of pride amongst the club coaches was evident to see. Once again, our athletes did the club, themselves, & their parents and coaches hugely proud over the weekend.

Thank you to every athlete who put on the blue and white singlet over the 2 days, and thank you to the coaches who make it all happen.

As always, we drive on to the next day….